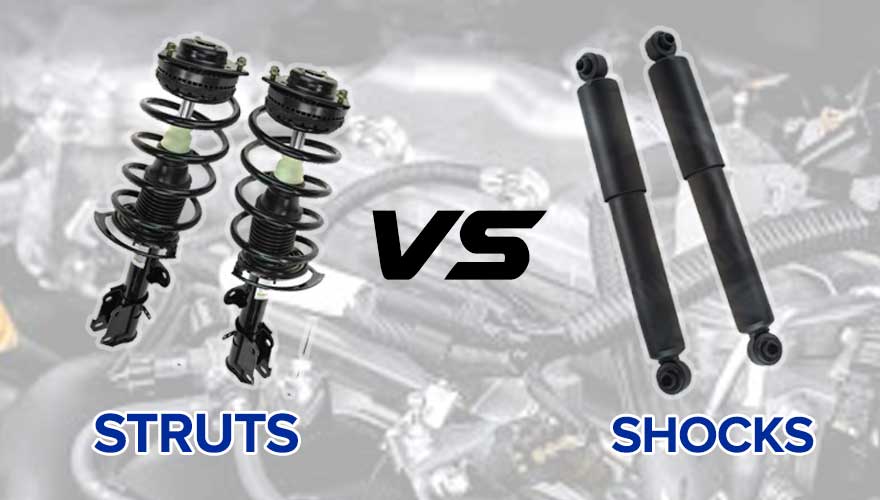 The smooth feel of the vehicle is because of two integral components: shock absorbers and struts. Today we will differentiate shock vs struts in detail.

While both shocks and struts are integral to the safety and comfort of the vehicle, they are in fact two distinct parts.
Let us dive in!

Shocks also are known as shock absorbers, are a key component of the suspension system. They control the impact and rebound movement of your vehicle’s springs and suspension, they ensure that the vehicle’s tires remain in contact with the road surface at all times .ultimately, they absorb energy. Without shocks, the wheels of the car or truck will actually bounce off of the road surface and vibrate unsystematically down rough roads. The key components of the shock absorber are a piston, a coil, and hydraulic fluid. When the car wheel dips down, for example into a pothole or gap, the shock activates a compression cycle, and a piston puts pressure on hydraulic fluid in the upper chamber of the device. The fluid slows down the coil as it relaxes back into place, and this helps prevent an extremely bumpy feel to the ride.

Struts are the structural part of the suspension system and they are used on the front end of nearly every front-wheel-drive vehicle. A strut integrates numerous different suspension parts into one compact assembly. The latter include: The coil spring can support the weight of the vehicle and adjust to road irregularities like bumps, hills, and valleys. Specifically, the struts connect the upper bearing to the lower ball joint so that the entire assembly can rotate when the vehicle is turned in any direction. Struts serve multiple purposes:

In sum, while the shocks simply absorb impact, the struts also function to support and control the vehicle in motion. That is how shock absorbers vs struts compare.

Shock vs Struts, What’s The Difference?

This is a common question that we receive as the terms shock and strut are often used interchangeably. A shock and a strut do the same basic job on a vehicle, damping the movement of the spring and stopping oscillation and bounce. Even though they do the same thing, shocks and struts are completely different parts. A shock cannot be used to replace a strut and a strut cannot be used to replace a shock. A vehicle will have either a shock or a strut at each wheel, never both. Every vehicle was designed with either shocks or struts and your vehicle’s suspension cannot be changed to use the other. The major difference between shocks and struts is that a strut is a structural part of the vehicle’s suspension system where a shock is not. A strut is also a crucial part of the vehicle’s steering system and greatly affects alignment angles. Camber and caster angles are usually adjusted right on the strut itself. A strut is also a pivot point for the vehicle’s steering system and contains a coil spring. Because of this, alignment is always needed when replacing a strut. This is also the reason that struts are typically more expensive than shocks.

When To Replace Them?

Visual signs such as :

Don’t “cut corners” when it comes to your shocks and struts. Proper functioning of these parts is essential to the handling and cornering of your vehicle, making for safer driving conditions.

So,here are some of the frequently asked questions about how do shocks and struts work on a car ,purpose ,happening?-

How Do Shocks And Struts Work On A Car?

Shocks and struts help stabilize your vehicle’s movements, enhancing control when you turn, brake, accelerate or encounter uneven road surfaces. Today’s vehicles use shocks, struts or a combination of the two.

What Is The Purpose Of Shock Absorbers In Cars?

What Happens If You Have Bad Shocks On Your Car?

Worn shocks or struts can increase the braking distance by up to 20%, which can be the difference between stopping safely and getting into an accident. Most people will mistake this sign as a need to have the brakes checked, but this might not necessarily mean your brake fluid is low.

Car shocks are technically oil pumps. The shock absorber operation involves pumping hydraulic fluid from one chamber into another and vice versa.

What Are The Symptoms Of Bad Struts On A Car?

Car struts, like shock absorbers, support and stabilize a vehicle’s frame and body. When struts fail, they exhibit a wide range of common symptoms that are easily noticed and identified. A bad car strut reduces a vehicle’s suspension strength and function considerably.

Can A Strut Be Replaced By A Shock?

A strut cannot be replaced by a shock and vice versa. The fundamental distinction between struts and shocks is that a strut is a part of your vehicle’s suspension system, whereas a shock is an additional element. A strut is also an important component of the car’s steering system, and its quality and efficiency might be affected.

There you have it, you’ve got all the shock vs struts knowledge in your back pocket and you never know when it’s going to come in handy.

Let us know in the comments below if you have any doubts.
Cheers!